Woody Allen's latest film is planned for Blu-ray in December. You can pre-order it here.

In an early announcement to retailers, Sony will be releasing 'Magic in the Moonlight' on Blu-ray on December 16.

'Magic in the Moonlight' is a romantic comedy about an Englishman brought in to help unmask a possible swindle. Personal and professional complications ensue. The film is set in the south of France in the 1920s against a backdrop of wealthy mansions, the Côte d'Azur, jazz joints and fashionable spots for the wealthy of the Jazz Age.

You can find the latest specs for 'Magic in the Moonlight' linked from our Blu-ray Release Schedule, where it is indexed under December 16. 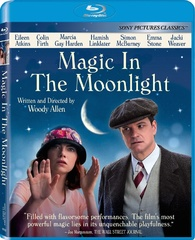