The film starring Joaquin Phoenix, Parker Posey, and Emma Stone is planned for Blu-ray next year.

In an early announcement to retailers, Sony is set to bring 'Irrational Man' on Blu-ray on January 12.

Soon after arriving to teach at a small town college, Abe Lucas (Joaquin Phoenix) gets involved with two women, Rita Richards (Parker Posey), a lonely professor who wants him to rescue her from her unhappy marriage; and Jill Pollard (Emma Stone), his best student, who becomes his closest friend. While Jill loves her boyfriend Roy (Jamie Blackley), she finds Abe's tortured, artistic personality and exotic past irresistible. Pure chance changes everything when Abe and Jill overhear a stranger's conversation and when Abe makes a profound choice, he is able to embrace life to the fullest again. But his decision sets off a chain of events that will affect him, Jill and Rita forever.

Specs have yet to be revealed, but supplements include: On the Red Carpet: Los Angeles Film Premiere; and Photo Gallery.

You can find the latest specs for 'Irrational Man' linked from our Blu-ray Release Schedule, where it is indexed under January 12. 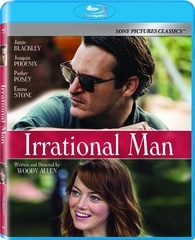