In an early announcement to retailers, Sony is preparing 'When the Game Stands Tall' for Blu-ray on December 9.

Inspired by the true story, Jim Caviezel (The Passion of the Christ) plays high school football coach Bob Ladouceur during the season that changed everything. As coach of the Spartans Football Team, Bob always tells his players that winning doesn't matter. Yet somehow, with the aid of assistant coach Terry Eidson (Michael Chiklis, TV’s “The Shield”), he’s led the team to a record-breaking 151 straight victories. When his wife Bev (Laura Dern, Jurassic Park) urges him to refocus on his family, Bob is blinded by the pressure to keep the streak alive. Now, in the midst of a season of crisis and tragedy when the Spartans stand to lose everything, a remarkable young player (Alexander Ludwig, The Hunger Games) helps Bob rediscover that teamwork outshines personal glory When The Game Stands Tall.

Specs have yet to be revealed, but supplements will include: Select Scene Commentary with Director Thomas Carter & Coach Bob Ladouceur; Six Deleted & Extended Scenes; "Undefeated: Making When the Game Stands Tall" -- A behind-the-scenes look at the challenges, excitement and triumphs of filming; "Gridiron Action" – A look at the dynamic approach filmmakers took to stage & film the exciting football sequences; and "The Heart and Soul of a Program" -- A look at the man behind the De La Salle Football Program.

You can find the latest specs for 'When the Game Stands Tall' linked from our Blu-ray Release Schedule, where it is indexed under December 9. 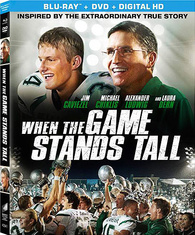