The music biography from filmmaker Marc Abraham arrives in July.

In an early announcement to retailers, Sony says 'I Saw The Light' will hit Blu-ray on July 5.

I Saw the Light, the story of the legendary country western singer Hank Williams, who in his brief life created one of the greatest bodies of work in American music. The film chronicles his meteoric rise to fame and its ultimately tragic effect on his health and personal life.

The Blu-ray will feature 1080p video, a lossless 5.1 soundtrack, and supplements include: Deleted Scenes; A Night in Nashville: Premiere and Musical Performance by Tom Hiddleston; Illuminating A Legend: Inside I Saw The Light; Talking Hank; and Audio Commentary with Director Marc Abraham.

You can find the latest specs for 'I Saw The Light' linked from our Blu-ray Release Schedule, where it is indexed under July 5. 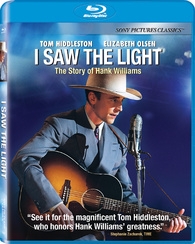