'The Walk' Blu-ray and Blu-ray 3D Up for Pre-Order!

Joseph Gordon-Levitt will balance his way toward Blu-ray later this year, and you can pre-order the disc now.

In an early announcement to retailers, Sony is preparing 'The Walk' for Blu-ray and Blu-ray 3D. An exact release date has not been announced yet.

Twelve people have walked on the moon, but only one man – Philippe Petit (Joseph Gordon-Levitt) – has ever walked in the immense void between the World Trade Center towers. Guided by his real-life mentor, Papa Rudy (Ben Kingsley), and aided by an unlikely band of international recruits, Petit and his gang overcome long odds, betrayals, dissension, and countless close calls to conceive and execute their mad plan. Academy Award-winning director Robert Zemeckis uses advanced technology in the service of an emotional, character-driven story. The Walk is a love letter to Paris and New York City in the 1970s, but most of all, to the Towers of the World Trade Center.

You can find the latest specs for 'The Walk' linked from our Blu-ray Release Schedule, where it's indexed under PENDING. 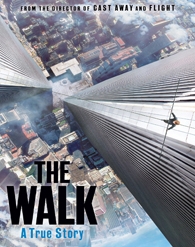 Discs mentioned in this article: (Click for specs and reviews)
The Walk - 3D (Blu-ray)
The Walk (Blu-ray)