The action-packed double feature is headed for Blu-ray in February.

In an early announcement to retailers, Sony is preparing 'The Raid Collection' for Blu-ray on February 28.

The Raid: Redemption - Deep in the heart of Jakarta's slums lies an impenetrable safe house for the world's most dangerous killers and gangsters. Until now, the rundown apartment block has been considered untouchable. Cloaked under the cover of pre-dawn darkness and silence, an elite swat team is tasked with raiding the safe house in order to take down the notorious drug lord that runs it. But when a chance encounter with a spotter blows their cover and news of their assault reaches the drug lord, they find themselves stranded on the 6th floor with no way out. The unit must fight their way through the city's worst [criminals] to survive their mission.

The Raid 2 - Immediately following the events of The Raid: Redemption, Rama (Iko Uwais) is forced to reinvent himself as an undercover cop in order to provide protection for his wife and child. Working for the anti-corruption taskforce led by the one person he can trust, Bunawar (Cok Simbara), he is given a mission to engage himself as an enforcer for a local mob boss, Bangun (Tio Pakusodewo). Finding a way in through Bangun's son Uco (Arifin Putra), Rama must hunt for information linking Bangun with police force corruption. All the while, he harbors a dangerous and personal vendetta for revenge and justice that threatens to consume him- and bring both this mission and the organized crime syndicates crashing down.

You can find the latest specs for 'The Raid Collection' linked from our Blu-ray Release Schedule, where it is indexed under February 28. 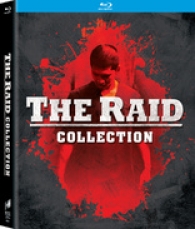