The controversial comedy coming to Blu-ray has been detailed and will arrive in a "Freedom Edition" next month.

In an early announcement to retailers, Sony will be releasing 'The Interview' on Blu-ray and the preliminary release date is February 17.

In the action-comedy The Interview, Dave Skylark (James Franco) and his producer Aaron Rapoport (Seth Rogen) run the popular celebrity tabloid TV show "Skylark Tonight." When they discover that North Korean dictator Kim Jong-un is a fan of the show, they land an interview with him in an attempt to legitimize themselves as journalists. As Dave and Aaron prepare to travel to Pyongyang, their plans change when the CIA recruits them, perhaps the two least-qualified men imaginable, to assassinate Kim Jong-un.

The Blu-ray will feature 1080p video, lossless 5.1 audio, and 90 minutes of bonus features including: behind-the-scenes featurettes, blooper reel and 'line-o-ramas', commentary by creators Seth Rogen and Evan Goldberg, and a TV Special.

You can find the latest specs for 'The Interview' linked from our Blu-ray Release Schedule, where it is indexed under February 17. 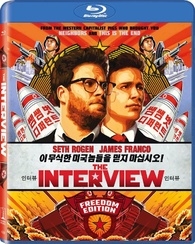