The Acclaimed 'Still Alice' Dated and Detailed for Blu-ray

The drama starring Academy Award Winner Julianne Moore is planned for Blu-ray in May.

In an early announcement to retailers, Sony will be releasing 'Still Alice' on Blu-ray on May 12th.

Alice Howland, happily married with three grown children, is a renowned linguistics professor who starts to forget words. When she receives a devastating diagnosis, Alice and her family find their bonds tested.

The Blu-ray will feature 1080p video, a lossless 5.1 soundtrack, and supplements include: Directing Alice: Making of Featurette; Finding Alice: The Cast, filmmakers and Alzheimer's experts discuss what when into Creating an accurate depiction of Alice Howland's Disease; and Three Deleted Scenes.

You can find the latest specs for 'Still Alice' linked from our Blu-ray Release Schedule, where it is indexed under May 12th. 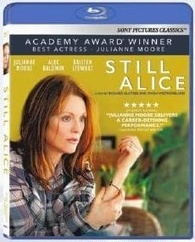