Martin Scorsese's classic film will be returning to theaters and receiving a 40th Anniversary Blu-ray later this year.

In an early announcement to retailers, Sony is preparing 'Taxi Driver: 40th Anniversary Edition' for Blu-ray on November 8.

'Taxi Driver' will also also return to U.S. cinemas for limited screenings on October 16th and 19th. Presented by Fathom Events, these special screenings will include never-before-released 10 minutes of Q&A with the film's cast and crew, recorded at the 2016 Tribeca Film Festival. In this discussion, exclusive to the Fathom Events screenings, director Scorsese, screenwriter Paul Schrader, producer Michael Phillips, and stars De Niro, Foster, Keitel and Shepherd recall the making and influence of the groundbreaking 1976 film. Tickets for the Fathom Events presentation of Taxi Driver are available beginning September 16 at www.FathomEvents.com and participating theater box offices.

You can find the latest specs for 'Taxi Driver: 40th Anniversary Edition' linked from our Blu-ray Release Schedule, where it is indexed under November 8. 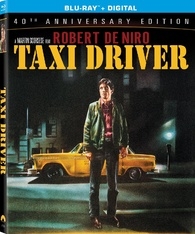