Adam McKay's 2006 comedy will be speeding to an Ultimate Fan Edition Blu-ray this October.

The fastest man on four wheels, Ricky Bobby (Will Ferrell) is one of the greatest drivers in NASCAR history. A big, hairy American winning machine, Ricky has everything a dimwitted daredevil could want, a luxurious mansion, a smokin' hot wife (Leslie Bibb) and all the fast food he can eat. But Ricky's turbo-charged lifestyle hits an unexpected speed bump when he's bested by flamboyant Euro-idiot Jean Girard (Sacha Baron Cohen) and reduced to a fear-ridden wreck. Losing his wife and job to best bud and fellow fool, Cal Naughton, Jr. (John C. Reilly), Ricky must kick some serious asphalt if he's to get his career back on the track, beat Girard and reclaim his fame and fortune. 'Cause as Ricky Bobby always says, IF YOU AIN'T FIRST, YOU'RE LAST!

You can find the latest specs for 'Talladega Nights: The Ballad of Ricky Bobby - Big Hairy American Winning Edition (Ultimate Fan Edition)' linked from our Blu-ray Release Schedule, where it is indexed under October 25. 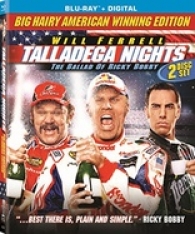