The fantasy rom-com will arrive on Blu-ray in July.

In an early announcement to retailers, Sony will be releasing 'The Mermaid' on Blu-ray on July 5.

Xuan's estate project involving reclamation of the sea threatens the livelihood of the mermaids who rely on the sea to survive. Shan is dispatched to stop Xuan and this leads them into falling for each other. Out of his love for Shan, Xuan plans to stop the reclamation. Unfortunately, Shan and the other mermaids are hunted by a hidden organization, and Xuan has to save Shan before it's too late.

Specs have yet to be revealed, but supplements include: The Making of The Mermaid; The Mermaid: Behind the Scenes; and Invincible Music Video.

You can find the latest specs for 'The Mermaid' linked from our Blu-ray Release Schedule, where it is indexed under July 5. 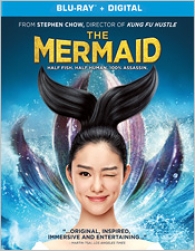