The first eight episodes of the sci-fi romance show will arrive on Blu-ray in March, and you can pre-order the series here.

In an early announcement to retailers, Sony is preparing 'Outlander: Season 1 - Volume 1' for Blu-ray on March 3. A separate 'Collector's Edition' will also be released on that same day.

British combat nurse Claire Randall is reunited with her husband after returning from the battlefields of World War II. While on their second honeymoon, she walks through one of the ancient stone circles that dot the British Isles and is suddenly transported to 1743 Scotland, torn by war and rogue Highland clans. Hurled back in time by forces she cannot understand, Claire is catapulted into intrigue and danger when she is accused of being a spy. Forced by circumstance to marry an outlawed Highlander, she finds herself falling in love and torn by her loyalties to two men in vastly different times, all of which may threaten her life and shatter her heart. Diana Gabaldon's best-selling book series is stunningly realized by Executive Producer Ronald D. Moore in Season One's first eight episodes.

Specs have not been detailed yet, but supplements will include: 21 Deleted Scenes; Outlander: An Epic Adaptation; Authentic in Design: The Dresses & Kilts of Outlander; Casting Outlander; On Location: Castle Leoch and the Magic of Scotland; Emerging a Scot: Cast Goes to Bootcamp; and Walk Through the Sets and Stages with Ronald D. Moore. In addition, the Collector's Edition will include special digibook packaging, a collectible lenticular, a 32-page book and a placeholder for Volume 2.

You can find the latest specs for 'Outlander: Season 1 - Volume 1' linked from our Blu-ray Release Schedule, where it's indexed under March 3. 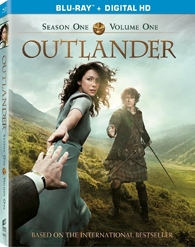 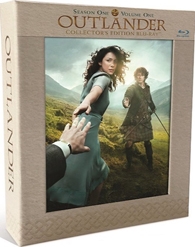