The western starring Dakota Fanning, Guy Pearce, and Kit Harington is riding toward Blu-ray in April.

In an early announcement to retailers, Sony is preparing 'Brimstone' for Blu-ray on April 11.

A triumphant epic of survival and a tale of powerful womanhood and resistance against the unforgiving cruelty of a hell on earth. Our heroine is Liz (Dakota Fanning), carved from the beautiful wilderness, full of heart and grit, hunted by a vengeful Preacher (Guy Pearce) - a diabolical zealot and her twisted nemesis. But Liz is a genuine survivor; she's no victim - a woman of fearsome strength who responds with astonishing bravery to claim the better life she and her daughter deserve. Fear not. Retribution is coming.

You can find the latest specs for 'Brimstone' linked from our Blu-ray Release Schedule, where it's indexed under April 11. 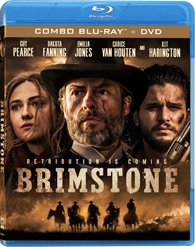 Discs mentioned in this article: (Click for specs and reviews)
Brimstone (Blu-ray)