The comedy starring Jason Segel and Cameron Diaz will be exposed on Blu-ray in October. Pre-order here.

In an early announcement to retailers, Sony will be releasing 'Sex Tape' on Blu-ray on October 21.

When Jay (Jason Segel) and Annie (Cameron Diaz) first got together, their romantic connection was intense – and though they're still very much in love, ten years and two kids have cooled the passion. To kick things up a notch, they decide – why not? – to make a video of themselves trying out every position in THE JOY OF SEX in one marathon three-hour session. It seems like a great idea – until they discover that their most private video is no longer private. With their reputations on the line, they know they're just one click away from being laid bare to the world... but in their race to reclaim their video, they'll find that it will expose even more than they bargained for.

The Blu-ray will feature 1080p video, a lossless 5.1 soundtrack, and supplements will include: Deleted & Extended Scenes; Bloopers; Line-O-Rama; and More...

You can find the latest specs for 'Sex Tape' linked from our Blu-ray Release Schedule, where it is indexed under October 21. 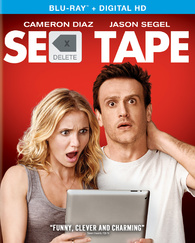