The R-rated animated comedy will be invited to both formats in November.

In an early announcement to retailers, Sony says 'Sausage Party' will be available on Blu-ray and 4K Ultra HD Blu-ray on November 8.

Sausage Party, the first R-rated CG animated movie, is about one sausage leading a group of supermarket products on a quest to discover the truth about their existence and what really happens when they become chosen to leave the grocery store. The film features the vocal talents of a who's who of today's comedy stars – Seth Rogen, Kristen Wiig, Jonah Hill, Bill Hader, Michael Cera, James Franco, Danny McBride, Craig Robinson, Paul Rudd, Nick Kroll, David Krumholtz, Edward Norton, and Salma Hayek.

The Blu-ray will feature 1080p video and lossless 5.1 audio (Ultra HD has 2160p video and a Dolby Atmos soundtrack) and supplements include: The Booth; The Great Beyond; The Pitch; Shock and Awe: How Did This Get Made?; Animation Imaginatorium; Good Food Gag Reel; and Line-O-Rama.

You can find the latest specs for 'Sausage Party' linked from our Blu-ray Release Schedule, where it is indexed under November 8. 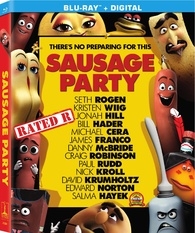 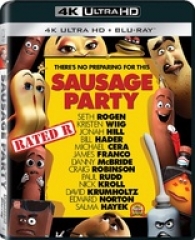