The sci-fi thriller starring Norman Reedus and Djimon Hounsou will awaken on Blu-ray in October.

In an early announcement to retailers, Sony will be releasing 'Air' on Blu-ray on October 6.

In the near future, breathable air is nonexistent. Virtually all of humanity has disappeared, and those chosen to reestablish society reside in a controlled state of suspended animation. Two engineers tasked with guarding the last hope for mankind struggle to preserve their own sanity and lives while administering to the vital task at hand.

Specs have yet to be revealed, but supplements include: An Account of Confinement: Creating Air, and The Custodians: Behind the Scenes with Norman Reedus and Djimon Hounsou.

You can find the latest specs for 'Air' linked from our Blu-ray Release Schedule, where it is indexed under October 6. 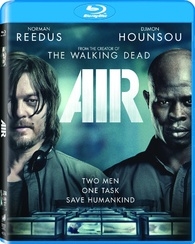