The satirical documentary will hit stores in July.

In an early announcement to retailers, Sony will be releasing 'Merchants of Doubt' on Blu-ray on July 7.

Inspired by Naomi Oreskes and Erik M. Conways acclaimed book, MERCHANTS OF DOUBT takes audiences on a comedic yet illuminating ride into the heart of conjuring American spin. Filmmaker Robert Kenner lifts the curtain on a secretive group of highly charismatic, silver tongued pundits-for-hire who present themselves in the media as scientific authorities yet contrarily are aiming to spread maximum confusion about well-studied public threats ranging from toxic chemicals to pharmaceuticals to climate change.

Specs have yet to be revealed, but the Blu-ray/DVD combo pack will include Deleted Scenes, Audio Commentary with Director Robert Kenner, and TIFF Q&A with Robert Kenner.

You can find the latest specs for 'Merchants of Doubt' linked from our Blu-ray Release Schedule, where it is indexed under July 7. 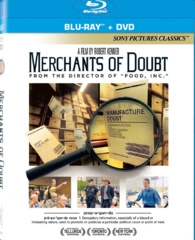