The horror comedy packed with vampires, zombies, and aliens is headed for Blu-ray next year.

In an early announcement to retailers, Sony says 'Freaks of Nature' will hit Blu-ray on February 9.

In Freaks of Nature, we welcome you to Dillford, where three days ago, everything was peaceful and business as usual: the vampires were at the top of the social order, the zombies were at the bottom, and the humans were getting along in the middle. But this delicate balance was ripped apart when the alien apocalypse arrived in Dillford and put an end to all the harmony. Now it's humans vs. vampires vs. zombies in all-out, blood-sucking, brain-eating, vamp-staking mortal combat – and all of them are on the run from the aliens. It is up to three teenagers – one human, one vampire, and one zombie – to team up, figure out how to get rid of the interplanetary visitors, and try to restore order to this "normal" little town.

Specs have yet to be revealed, but supplements include: Cast Gag Reel; Alternate Opening; and Deleted Scenes.

You can find the latest specs for 'Freaks of Nature' linked from our Blu-ray Release Schedule, where it is indexed under February 9. 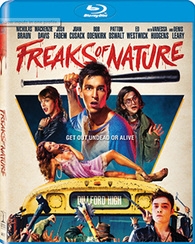