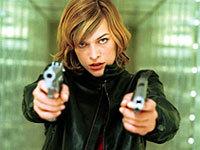 The 2010 zombie apocalypse film starring Mila Jovovich is coming to 4K Blu-ray in the new year.

In an early announcement to retailers, Sony says 'Resident Evil: Afterlife - Ultra HD Blu-ray' will be available on 4K Blu-ray on January 17.

After a one-woman assault on the Umbrella Corporation's fortress, Alice's (Mila Jovovich) superhuman abilities are neutralized. Now, fleeing the Undead masses created by the T-virus, Alice reunites with Claire Redfield (Ali Larter) and her brother, Chris (Wentworth Miller). Together they take refuge with other survivors in an abandoned prison, where a savage zombie mob stands between them and the safety of "Arcadia." Escaping these bloodthirsty mutants will take an arsenal. But facing off with Albert Wesker and the Umbrella Corporation will take the fight for survival to a new level of danger.

You can find the latest specs for 'Resident Evil: Afterlife - Ultra HD Blu-ray' linked from our 4K Blu-ray Release Schedule, where it's indexed under January 17.