The romantic comedy will be available in stores at the end of August.

In an early announcement to retailers, Sony will be releasing 'Maggie's Plan' on Blu-ray on August 23.

In Rebecca Miller's witty romantic comedy, Maggie (Greta Gerwig) is a vibrant New Yorker who, without success in finding love, decides to have a child on her own. But when she meets John Harding (Ethan Hawke), an anthropology professor and struggling novelist, she falls in love for the first time. Complicating matters, John is in an unhappy marriage with Georgette (Julianne Moore), an ambitious academic who is driven by her work. With some help from Maggie's eccentric best friends, married couple Tony (Bill Hader) and Felicia (Maya Rudolph), Maggie sets in motion a new plan that intertwines their lives and connects them in surprising and humorous ways.

Specs have yet to be revealed, but supplements include: Controlling Fate: The Making of Maggie's Plan - Featurette; Hilarious Outtakes; Q & A at The Sundance Film Festival; and Audio Commentary with Writer/Director Rebecca Miller.

You can find the latest specs for 'Maggie's Plan' linked from our Blu-ray Release Schedule, where it is indexed under August 23. 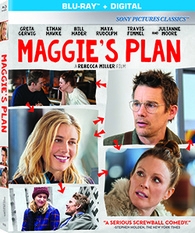