The dramedy starring Lily Tomlin and Julia Garner will be available on Blu-ray in February.

In an early announcement to retailers, Sony has revealed that 'Grandma' will arrive on Blu-ray on February 9.

Elle Reid (Lily Tomlin) has just gotten through breaking up with her girlfriend when her granddaughter Sage (Julia Garner) unexpectedly shows up needing $600 before sundown. Temporarily broke, Grandma Elle and Sage spend the day trying to get their hands on the cash, as their unannounced visits to old friends and flames end up rattling skeletons and digging up secrets. Refreshingly unapologetic and candid, Grandma navigates the intricacies of relationships between three generations of women.

You can find the latest specs for 'Grandma' linked from our Blu-ray Release Schedule, where it is indexed under February 9. 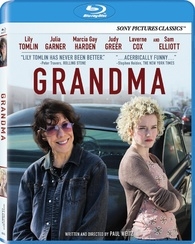