The comedy sequel will arrive on Blu-ray in July.

In an early announcement to retailers, Sony is preparing 'Paul Blart: Mall Cop 2' for Blu-ray on July 14.

In this sequel, in which Kevin James reprises the role of Paul Blart, the security guard is headed to Las Vegas to attend a Security Guard Expo with his teenage daughter Maya (Raini Rodriguez) before she departs for college. While at the convention, he inadvertently discovers a heist – and it's up to Blart to apprehend the criminals.

The Blu-ray combo pack will feature 1080p video, lossless 5.1 audio, and supplements include deleted scenes, 6 featurettes, a gag reel, and a photo gallery.

You can find the latest specs for 'Paul Blart: Mall Cop 2' linked from our Blu-ray Release Schedule, where it is indexed under July 14. 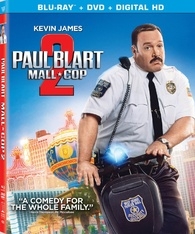