The 2016 film will be available on home video at the end of the month.

In an early announcement to retailers, Warner Archive is working on 'The Handmaiden' for Blu-ray on March 28.

From Park Chan-wook, the celebrated director of Oldboy, Lady Vengeance, and Stoker, comes a ravishing new crime drama. Park presents a gripping and sensual tale of two women - a young Japanese Lady living on a secluded estate, and a Korean woman who is hired to serve as her new handmaiden, but is secretly plotting with a conman to defraud her of a large inheritance.

Inspired by the novel Fingersmith by British author Sarah Waters, The Handmaiden borrows the most dynamic elements of its source material and combines it with Park Chan-wook's singular vision to create an unforgettable viewing experience.

The Blu-ray will feature 1080p video, a lossless 5.1 soundtrack, and there doesn't appear to be any supplements.

You can find the latest specs for 'The Handmaiden' linked from our Blu-ray Release Schedule, where it is indexed under March 28. 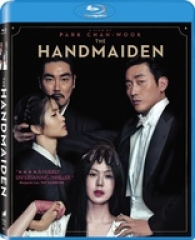