The second season of the fantasy romance series is heading to Blu-ray in November.

As previously reported, Sony is preparing 'Outlander: Season 2' for Blu-ray later this year, and now the date has been set for November 1. A separate Amazon exclusive 'Collector's Edition' will also be available.

Season two of 'Outlander' begins as Claire (Caitriona Balfe) and Jamie (Sam Heughan) arrive in France, hell-bent on infiltrating the Jacobite rebellion led by Prince Charles Stuart (Andrew Gower), and stopping the battle of Culloden. With the help of his cousin Jared (Robert Cavanah), a local wine merchant, Jamie and Claire are thrown into the lavish world of French society, where intrigue and parties are abundant, but political gain proves far less fruitful. Altering the course of history presents challenges that begin to weigh on the very fabric of their relationship. However, armed with the knowledge of what lies ahead, Claire and Jamie must race to prevent a doomed Highland uprising, and the extinction of Scottish life as they know it.

The releases will include: Deleted and Extended Scenes with Audio Commentary by Ronald D. Moore; Gag Reel; From Book to Screen: Discovering the Differences; and The Characters of Season Two.

The Collector's Edition will add a collectible box; 32-page book with photographs and behind-the-scenes sketches; exclusive sneak peek from Book 9 (Diana Gabaldon's forthcoming book in the Outlander series); and a bonus disc with 20 minutes of exclusive added value content.

You can find the latest specs for 'Outlander: Season 2' linked from our Blu-ray Release Schedule, where it's indexed under November 1. 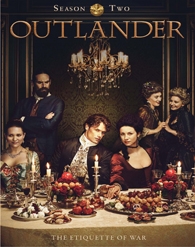 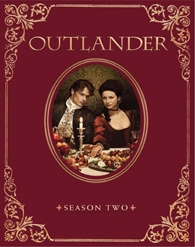