The animated comedy sequel will target Blu-ray next month.

Boog and Elliot are back in an all-new fun-tastic adventure! When Elliot tells a campfire story of a monster in the woods, Boog – who has never been the bravest of bears – becomes very scared. His best friend Elliot comes up with a crazy plan to scare the fear out of Boog! With the help of Mr. Weenie, McSquizzy and the rest of their forest friends, they embark on a memorable journey where the power of friendship helps Boog overcome his fears with lots of laughs and some surprises along the way!

This national debut, from Sony Pictures Home Entertainment, is the latest release for one of the most successful animated franchises to date, bringing back Elliot, Boog and all of the beloved woodland creatures from the previous Open Season series. The fourth installment is a comedic mystery adventure directed by David Feiss (head of story on the original Open Season and creator of the popular TV series “Cow and Chicken”); produced by John Bush (TV’s “The Simpsons”); and featuring computer animation from Rainmaker Entertainment, Inc.

Says Director Feiss, “My affection for these characters has only grown since we introduced them in Sony Pictures Animation’s first feature. We’re having a lot of fun bringing them back for a new adventure—it feels like a big party with old friends.” Most recently, Feiss -- whose prolific career began as a story artist for Hanna-Barbera -- directed four mini-movies for the home entertainment release of Sony Pictures Animation’s Cloudy With A Chance Of Meatballs 2, entitled Steve’s First Bath, Super Manny, Attack Of The 50 Ft. Gummy Bear and Earl Scouts.

You can find the latest specs for 'Open Season: Scared Silly' linked from our Blu-ray Release Schedule, where it is indexed under March 8. 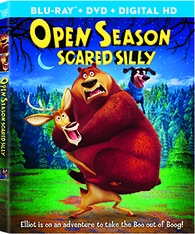