The animated film featuring the voices of Paul Rudd, Patton Oswalt, and Mike Judge will be getting the Blu-ray treatment in February.

In an early announcement to retailers, Sony says 'Nerdland' will be available on Blu-ray on February 7.

Nerdland is the story of two best friends, aspiring screenwriter ELLIOT and aspiring actor JOHN, whose dreams of super-stardom have fizzled. With their 30th birthdays looming and their desperation growing, John and Elliot decide that in this 24/7, celebrity-obsessed world of over-shared navel-gazing, there are more ways to become famous -- or infamous -- then ever before.

You can find the latest specs for 'Nerdland' linked from our Blu-ray Release Schedule, where it is indexed under February 7. 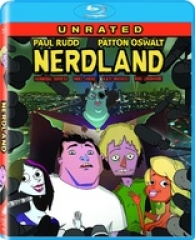