'My Girl' Bound for Blu-ray

The charming 1991 film will arrive on Blu-ray next month.

In an early announcement to retailers, Sony will be releasing 'My Girl' on Blu-ray on March 17.

In 'My Girl', Anna Chlumsky makes an extraordinary acting debut as Vada Sultenfuss, a precocious 11-year-old tomboy obsessed with death. Macauley Culkin is Thomas J., the boy next door who idolizes Vada. Their summer adventures – from first kiss to last farewell – introduce Vada to the world of adolescence. Now fully remastered in high definition, 'My Girl' is a motion picture to cherish and share across generations.

Specs have yet to be revealed, but supplements will include All-New Commentary with Writer Laurice Molinari; Two All-New Featurettes: "A Day on Set: Bingo!" – A behind-the-scenes look at filming the very fun bingo scene with Dan Aykroyd and Jamie Lee Curtis, and "A Day on Set: First Kiss" - This featurette offers a rare look at filming Thomas and Vada's first kiss; and Original Theatrical Behind-the-Scenes Featurette - Original 1991 featurette created for the theatrical release. Features behind-the-scenes footage and interviews with Anna Chlumsky, Macaulay Culkin, Dan Aykroyd & Jamie Lee Curtis.

You can find the latest specs for 'My Girl' linked from our Blu-ray Release Schedule, where it is indexed under March 17. 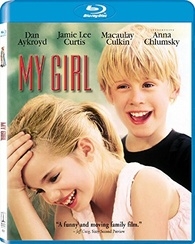