'Mr. Smith Goes to Washington' Announced and Detailed for Blu-ray

Frank Capra's 1939 classic will be getting a digibook Blu-ray this December. You can pre-order it now.

In an early announcement to retailers, Sony will be releasing 'Mr. Smith Goes to Washington' on Blu-ray on December 2.

The film starring James Stewart and Jean Arthur was nominated for 11 Academy Awards and has received a 4K restoration to commemorate its 75th Anniversary.

Specs have yet to be revealed, but the release will feature digibook packaging and supplements will include: Audio commentary by Frank Capra Jr.; Original theatrical trailer; Rare international trailer which includes footage deleted from the final film; Feature-length documentary: Frank Capra's American Dream, narrated by Ron Howard and incorporating interviews with the director's friends, colleagues and admirers; "Frank Capra Jr. Remembers ... Mr. Smith Goes To Washington," in which the son of the famous director offers insight on his father's technique, the motivation of the actors and the production of the film; and Four additional featurettes offering a behind-the-scenes look at one of Hollywood's greatest and most influential directors.

You can find the latest specs for 'Mr. Smith Goes to Washington' linked from our Blu-ray Release Schedule, where it is indexed under December 2. 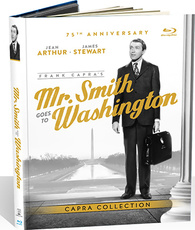