The comedy classic will be getting two new Blu-ray editions in October.

In an early announcement to retailers, Sony is set to release 'Monty Python and the Holy Grail: 40th Anniversary Edition' on Blu-ray on October 27.

Classic comedy from the Monty Python team in their second feature. King Arthur (Graham Chapman) and his trusty knights fearlessly - on the most part - travel the length and breadth of the country in search of the mythical Holy Grail. On their way they have to deal with the sarcastic taunts of the French Knight, the Knights who say 'Ni', Tim the Enchanter (John Cleese) and the Terror of the Cave of Caerbannog amongst other things.

Each release will feature 1080p video, lossless 5.1 audio, and supplements include: Monty Python and the Holy Grail at the 2015 Tribeca Film Festival Q&A (All-New Blu-ray Exclusive), Outtakes and Extended Scenes with Introduction by Terry Jones, Lost Animations with Introduction by Terry Gilliam, Scintillating Commentary by Terry Gilliam & Terry Jones and Even More Revealing Commentary by John Cleese, Eric Idle and Michael Palin, Quest for the Holy Grail Locations with Michael Palin & Terry Jones, Lego Knights: The Knights of the Round Table in LEGO, Special Japanese Version, How To Use Your Coconuts (An Educational Film), BBC Film Night on Location, Three Songs to Sing-Along, Photo Gallery, and Original Theatrical Trailer.

You can find the latest specs for 'Monty Python and the Holy Grail: 40th Anniversary Edition' linked from our Blu-ray Release Schedule, where it is indexed under October 27. 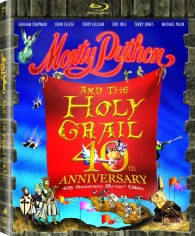 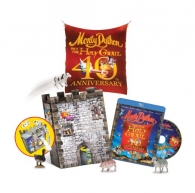