The inspirational drama is now available for pre-order.

In an early announcement to retailers, Sony is preparing 'Miracles From Heaven' for Blu-ray later this year.

'Miracles From Heaven' is based on the incredible true story of the Beam family.  When Christy (Jennifer Garner) discovers her 10-year-old daughter Anna (Kylie Rogers) has a rare, incurable disease, she becomes a ferocious advocate for her daughter’s healing as she searches for a solution. After Anna has a freak accident, an extraordinary miracle unfolds in the wake of her dramatic rescue that leaves medical specialists mystified, her family restored, and their community inspired.

Suggested list price for the Blu-ray/DVD/UltraViolet combo pack is $38.99.

You can find the latest specs for 'Miracles From Heaven' linked from our Blu-ray Release Schedule, where it's indexed under PENDING. 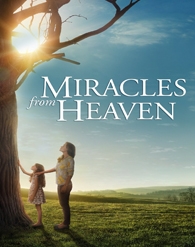 Discs mentioned in this article: (Click for specs and reviews)
Miracles from Heaven (Blu-ray)