The Miles Davis biopic is coming to Blu-ray in July.

In an early announcement to retailers, Sony is preparing 'Miles Ahead' for Blu-ray on July 19.

'Miles Ahead' is a wildly entertaining exploration of one of 20th century music's creative geniuses, Miles Davis, featuring a career defining performance by Oscar nominee Don Cheadle in the title role. In the midst of a prolific career at the forefront of modern jazz, Miles Davis (Cheadle) virtually disappears from public view for a period of five years in the late 1970s, his musical voice stifled and numbed by drugs and pain medications. Dave Braden (Ewan McGregor), a wily music reporter, forces his way into Davis' life and, over the next couple of days, the two men unwittingly embark on a wild and sometimes harrowing adventure to recover a stolen tape of the musician's latest compositions. Plagued by years of regret and loss, Davis flirts with annihilation until he once again finds salvation in his art.


Specs have not been detailed yet, but supplements will include: Commentary with Director Don Cheadle and Co-writer Steven Baigelman; Featurette - The Truth: Becoming Miles Davis; and 2016 Sundance Film Festival Q & A with Don Cheadle, Ewan McGregor, Emayatzy Corinealdi and LaKeith Lee Stanfield.

You can find the latest specs for 'Miles Ahead' linked from our Blu-ray Release Schedule, where it's indexed under July 19. 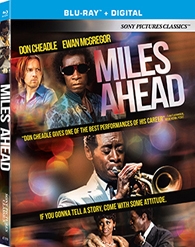 Discs mentioned in this article: (Click for specs and reviews)
Miles Ahead (Blu-ray)