The horror/comedy starring Dolph Lundgren (with a drawl!) is coming to Blu-ray in April.

In an early announcement to retailers, Sony is preparing 'Don't Kill It' for Blu-ray on April 4.

When an ancient demon is accidentally unleashed in a sparsely populated Mississippi town of Chickory Creek, their only hope of survival lies in the hands of a grizzled old demon hunter Jebediah Woodley and his reluctant partner FBI agent Evelyn Pierce.

You can find the latest specs for 'Don't Kill It' linked from our Blu-ray Release Schedule, where it is indexed under April 4. 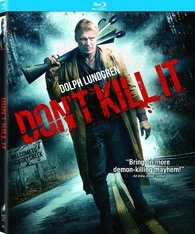