The critically acclaimed biopic is heading to Blu-ray in May, and you can pre-order the disc now.

In an early announcement to retailers, Sony is preparing 'Mr. Turner' for Blu-ray on May 5.

'Mr. Turner' explores the last quarter century of the great if eccentric British painter J.M.W. Turner (1775-1851). Profoundly affected by the death of his father, loved by a housekeeper he takes for granted and occasionally exploits sexually, he forms a close relationship with a seaside landlady with whom he eventually lives incognito in Chelsea, where he dies. Throughout this, he travels, paints, stays with the country aristocracy, visits brothels, is a popular if anarchic member of the Royal Academy of Arts, has himself strapped to the mast of a ship so that he can paint a snowstorm, and is both celebrated and reviled by the public and by royalty.

Specs have not been detailed yet, but supplements will include: Audio Commentary with Director Mike Leigh; The Cinematic Palette: The Cinematography of Mr. Turner; Many Colors of Mr. Turner; and Deleted Scene.

You can find the latest specs for 'Mr. Turner' linked from our Blu-ray Release Schedule, where it's indexed under May 5. 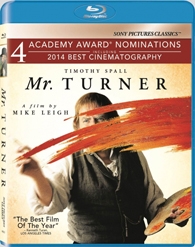 Discs mentioned in this article: (Click for specs and reviews)
Mr. Turner (Blu-ray)