The sports drama starring Will Smith as the legendary Mohammed Ali will take another jab at Blu-ray this January.

In an early announcement to retailers, Sony says 'Ali: Commemorative Edition' is heading to Blu-ray on January 17.

Muhammad Ali thrilled the world as the wildly outrageous heavyweight champion. At the same time, he did battle with a political establishment aggressively opposed to his political positions while he was grappling with a tumultuous romantic life. Filmmaker Michael Mann evokes Ali in his fullest human dimension in this new cut. Experience the epic drama from Academy Award nominees Will Smith (Ali, The Pursuit of Happyness) and director, writer, producer Michael Mann (The Insider, The Aviator) on Blu-ray for the first time.

The release will feature 1080p video, lossless 5.1 audio, and supplements include: "On Set with The Greatest" featurette (NEW); "The Making of Ali" Featurette; and Theatrical Trailer.

You can find the latest specs for 'Ali: Commemorative Edition' linked from our Blu-ray Release Schedule, where it is indexed under January 17. 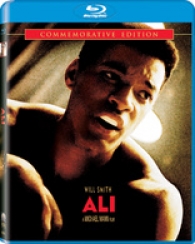