The first season of the PlayStation Network original series will make its Blu-ray debut in July.

In an early announcement to retailers, Sony is set to release 'Powers: The Complete First Season' on Blu-ray on July 14.

Based on the 2004 comic book series of the same name from artist Michael Avon Oeming and writer Brian Michael Bendis, Powers asks, what if the world was full of superheroes who aren't actually heroic at all? What if all their "powers" were just one more excuse for mischief, mayhem, murder, and endorsement deals? Enter the men and women of the Powers Division, the brave people in charge of protecting humans like us and keeping the peace over commercialized, god-like men and women who glide through the sky imposing their power over the mortals who both worship and fear them.

The series follows LAPD "Powers Division" detectives Christian Walker (Sharlto Copley) and Deena Pilgrim (Susan Heyward) as they investigate homicide cases involving people with superhuman abilities. Walker, once operating as a power until he lost his abilities to the super villain Wolfe (Eddie Izzard), now operates with just a gun and a badge to take down the formidable foes plaguing Los Angeles.

Specs and supplements have yet to be revealed, but the suggested list price for the Blu-ray is $45.99.

You can find the latest specs for 'Powers: The Complete First Season' linked from our Blu-ray Release Schedule, where it is indexed under July 14. 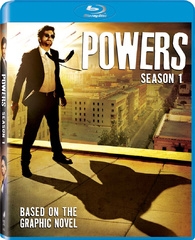