As previously reported, Sony is working on 'Equity' for Blu-ray on December 13.

A female investment banker, fighting to rise to the top of the corporate ladder at a competitive Wall Street firm, navigates a controversial tech IPO in the post-financial crisis world, where loyalties are suspect, regulations are tight, but pressure to bring in "big money" remains high.

Equity is about women on Wall Street. It's a Wall Street drama, but it's not about corruption, crime, or catastrophe. It's about women who thrive on competition and ambition, deals and strategy, but who must carefully calibrate every aspect of their lives, professional and private, to stay equal in the game. Equity is directed, written, produced, and financed by women, a collaboration among women in entertainment and business leaders in finance—the real-life women of Wall Street—who chose to invest in this film because they wanted to see their story told.

Specs have not been detailed yet, but supplements will include Three Featurettes:

You can find the latest specs for 'Equity' linked from our Blu-ray Release Schedule, where it's indexed under December 13. 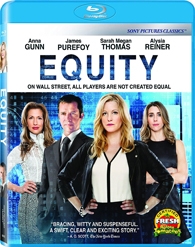 Discs mentioned in this article: (Click for specs and reviews)
Equity (Blu-ray)