The Grand Jury Prize nominee at the 2015 Sundance Film Festival is planned for a Blu-ray release in January.

In an early announcement to retailers, Sony will be releasing 'The Diary of a Teenage Girl' on Blu-ray on January 19.

Based on Phoebe Gloeckners novel of the same name, The Diary of a Teenage Girl was hailed by Salon as one of the most brutally honest, shocking, tender and beautiful portrayals of growing up female in America. Director Marielle Heller unlocks this diary with a richly comedic and deeply personal vision, bringing Gloeckners book to life with fearless performances, a rousing score, and inventive graphic novel-like animation sequences. It is a bold, strikingly intimate account of one girls sexual and artistic awakening, without judgment.

You can find the latest specs for 'The Diary of a Teenage Girl' linked from our Blu-ray Release Schedule, where it is indexed under January 19. 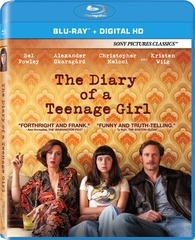