Maggie Smith is 'The Lady in the Van' on Blu-ray

Alan Bennett's true life tale will be parked on Blu-ray in April.

In an early announcement to retailers, Sony will be releasing 'The Lady in the Van' on Blu-ray on April 19.

Alan Bennett's story is based on the true story of Miss Shepherd (played by a magnificent Maggie Smith), a woman of uncertain origins who "temporarily" parked her van in Bennett's London driveway and proceeded to live there for 15 years. What begins as a begrudged favor becomes a relationship that will change both their lives. Filmed on the street and in the house where Bennett and Miss Shepherd lived all those years, acclaimed director Nicholas Hytner reunites with iconic writer Alan Bennett (The Madness of King George, The History Boys) to bring this rare and touching portrait to the screen.

Specs haven't been revealed yet, but supplements include: Playing The Lady: Maggie Smith as Miss Shepherd; Deleted Scenes; The Making of The Lady in the Van; The Visual Effects; and Commentary with Director Nicholas Hytner.

You can find the latest specs for 'The Lady in the Van' linked from our Blu-ray Release Schedule, where it is indexed under April 19. 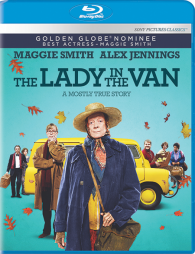