The dramatic comedy starring Susan Sarandon and Rose Byrne is headed for Blu-ray in September.

In an early announcement to retailers, Sony is preparing to release 'The Meddler' on Blu-ray on September 6.

With a new iPhone, an apartment near the Grove, and a comfortable bank account left to her by her beloved late husband, Marnie Minervini (Susan Sarandon) has happily relocated from New Jersey to Los Angeles to be near her daughter Lori (Rose Byrne), a successful but still single screenwriter, and smother her with motherly love. But when the dozens of texts, unexpected visits, and conversations dominated by unsolicited advice force Lori to draw strict personal boundaries, Marnie finds ways to channel her eternal optimism and forceful generosity to change the lives of others - as well as her own - and find a new purpose in life.

Specs haven't been revealed yet, but supplements include: Audio Commentary with Susan Sarandon and Director Lorene Scafaria; The 'Real' Marnie; The Making of The Meddler; and Gag Reel.

You can find the latest specs for 'The Meddler' linked from our Blu-ray Release Schedule, where it is indexed under September 6. 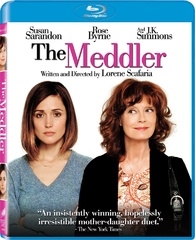