The Academy Award-winner for Best Foreign Language Film is planned for Blu-ray in April.

In an early announcement to retailers, Sony says 'Son of Saul' will arrive on Blu-ray on April 26.

In the horror of 1944 Auschwitz, a prisoner forced to burn the corpses of his own people finds moral survival upon trying to salvage from the flames the body of a boy he takes for his son.

You can find the latest specs for 'Son of Saul' linked from our Blu-ray Release Schedule, where it is indexed under April 26. 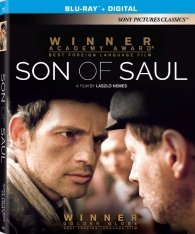