The adventure comedy film will hit the road on Blu-ray in November, and pre-orders are now live.

In an early announcement to retailers, Sony is preparing 'Land Ho!' for Blu-ray on November 4.

Mitch, a bawdy former surgeon, convinces mild-mannered Colin, his ex-brother-in-law, to embark on an unplanned trip to Iceland with him. In an effort to get their grooves back, the odd couple set off on a road trip that takes them through trendy Reykjavík to the rugged outback. Mitch and Colin’s picaresque adventures through Iceland evolve into a candid exploration of aging, loneliness and friendship.

Suggested list price for the Blu-ray/DVD combo pack is $40.99.

You can find the latest specs for 'Land Ho!' linked from our Blu-ray Release Schedule, where it's indexed under November 4. 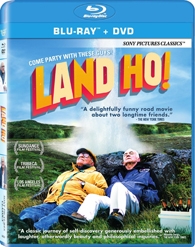 Discs mentioned in this article: (Click for specs and reviews)
Land Ho! (Blu-ray)