In an early announcement to retailers, Sony will be releasing 'My Best Friend's Wedding' on Blu-ray on February 3.

A 28-year-old woman, who years earlier made a pact with her closest male friend that if neither were married in ten years time they would marry one another, now faces the fact that the man is about to marry someone else. He asks her to be his "best man" and she agrees, going to the ceremony to break up the couple before they exchange their vows.

You can find the latest specs for 'My Best Friend's Wedding' linked from our Blu-ray Release Schedule, where it is indexed under February 3. 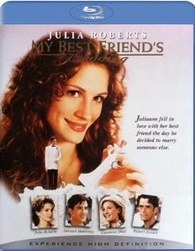