'Journey to the West: The Demons Strike Back' Blu-ray Bound

In an early announcement to retailers, Sony is working on 'Journey to the West: The Demons Strike Back' for Blu-ray on June 6.

A sequel to Journey to the West: Conquering the Demons, the Monkey King is back. Now tamed by Tang Sanzang, Monkey King has become one of Tang's disciples. Tang, Monkey King, Sandy and Pigsy band together to fight demons as they continue their journey west.

Tang Monk brings three disciples on a journey to the West. On the outside, everything seems harmonious. However, tension is present beneath the surface, and their hearts and minds are not in agreement. After a series of demon-capturing events, the monk and his disciples gain mutual understanding of each others' hardships and unease. Finally, they resolve their inner conflict and work together to become an all-conquering, demon-exorcising team.

You can find the latest specs for 'Journey to the West: The Demons Strike Back' linked from our Blu-ray Release Schedule, where it is indexed under June 6. 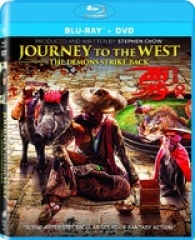