Jonathan Levine's 'The Night Before' Dated and Detailed for Blu-ray

The holiday comedy starring Seth Rogen, Joseph Gordon-Levitt, and Anthony Mackie will be coming down Blu-ray's chimney in March.

In an early announcement to retailers, Sony is set to release 'The Night Before' on Blu-ray on March 1.

From the guys who brought you Neighbors, This Is The End, and ALMOST The Interview... Ethan (Joseph Gordon-Levitt), Isaac (Seth Rogen) and Chris (Anthony Mackie) have been friends since childhood, and for a decade, their yearly Christmas Eve reunion has been an annual night of debauchery and hilarity. Now that they're entering adulthood, the tradition is coming to an end, and to make it as memorable as possible, they set out to find the Nutcracka Ball – the Holy Grail of Christmas parties.

Specs have yet to be revealed, but supplements include: Cast Gag Reel; Making One Epic Party: 20 Minutes of On-Set Shenanigans; The Spirit of Christmas; Drunkest Santas on The Block; Whale Juice: Extended Strip Club Scene; Midnight Mass with Nana; plus Blu-ray exclusive Deleted & Extended Scenes; Mr. Green Line-O Rama; and Christmas in the Summer Featurette.

You can find the latest specs for 'The Night Before' linked from our Blu-ray Release Schedule, where it is indexed under March 1. 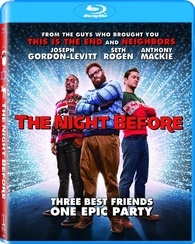