The critically-acclaimed six-part miniseries is coming to Blu-ray in August.

As previously reported, Sony is preparing 'The Night Manager' for Blu-ray, and now the date has been set for August 30.

Former British soldier Jonathan Pine (Tom Hiddleston) is recruited by Burr (Olivia Colman), an intelligence operative. He is tasked to navigate Whitehall and Washington, D.C. where there is an alliance between the intelligence community and the secret arms trade. He must infiltrate the inner circle of arms dealer Richard Onslow Roper (Hugh Laurie), Roper's girlfriend Jed (Elizabeth Debicki), and associate Corcoran (Tom Hollander).

The Night Manager is a new show directed by acclaimed Danish helmer Susanne Bier (After the Wedding, In a Better World) and starring Tom Hiddleston, Hugh Laurie, Olivia Colman, Tom Hollander and Elizabeth Debicki. The show is based on the novel of the same name by John le Carré.

You can find the latest specs for 'The Night Manager' linked from our Blu-ray Release Schedule, where it is indexed under August 30. 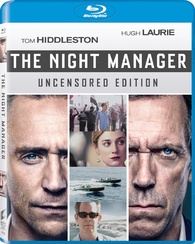