The dramedy will hit Blu ray in early December.

In an early announcement to retailers, Sony says 'The Hollars' will be available on Blu-ray on December 6.

The film follows John Hollar, a struggling New York City graphic novelist, who is forced to return home when his mother Sally is diagnosed with a brain tumor. Back in the house he grew up in, John is immediately swept up in the problems of his dysfunctional family, high school rival, and an overeager ex-girlfriend as he faces impending fatherhood with his girlfriend Rebecca (Anna Kendrick) in New York.

You can find the latest specs for 'The Hollars' linked from our Blu-ray Release Schedule, where it is indexed under December 6. 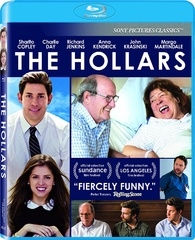