As previously reported, Sony has revealed 'Money Monster' will arrive on Blu-ray sometime later this year, and now the date has been set for September 6.

In the taut and tense thriller Money Monster, Lee Gates (George Clooney) is a bombastic TV personality whose popular financial network show has made him the money wiz of Wall Street. But after he hawks a high tech stock that mysteriously crashes, an irate investor (Jack O'Connell) takes Gates, his crew, and his ace producer Patty Fenn (Julia Roberts) hostage live on air. Unfolding in real time, Gates and Fenn must find a way to keep themselves alive while simultaneously uncovering the truth behind a tangle of big money lies.

Specs have yet to be revealed, but supplements include: Deleted Scenes; George Clooney, The Money Man; Inside the Pressure Cooker; Analysis of a Scene - The Showdown; Dan the Automator (feat. Del the Funky Homosapien) "What Makes the World Go 'Round (MONEY!)" Music Video.

You can find the latest specs for 'Money Monster' linked from our Blu-ray Release Schedule, where it's indexed under September 6. 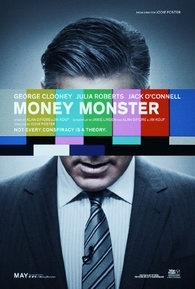