The Shelley Long comedy heads to Blu-ray next month.

In an early announcement to retailers, Sony will be releasing 'Troop Beverly Hills' on Blu-ray on March 17.

Shelley Long discovers that when the going gets tough, the tough go camping in Troop Beverly Hills. Flamboyantly wealthy Phyllis Nefler (Long) has everything money can buy – a Beverly Hills mansion, a classic Rolls, furs, jewelry and designer gowns. The one thing she doesn't have is her husband Freddy (Craig T. Nelson), who's leaving her for good. Maybe. Determined to prove she's still the creative, energetic woman Freddy once loved, Phyllis throws luxury to the wind and becomes the leader of her daughter's Wilderness Girls troop. But how much can this chic cookie take before she crumbles?

Specs have yet to be revealed, but supplements will include Never-Before-Seen Deleted Scenes; Two All-New Featurettes: "The Real Phyllis Nefler: Ava Ostern Fries" - Ava Ostern Fries, the real life Phyllis Nefler, discusses how she was inspired to create the film using her real-life experiences with her daughter's Girl Scout troop. She reminisces about her time on set with the kids, Shelley Long and countless other stories about the wonderful time filming in Beverly Hills; and "Shelley Long Remembers Troop Beverly Hills" - Shelley Long looks back on her time making the film, including first reading the script, filming, her co-stars, favorite moments, costumes, locations and the real Phyllis Nefler.

You can find the latest specs for 'Troop Beverly Hills' linked from our Blu-ray Release Schedule, where it is indexed under March 17. 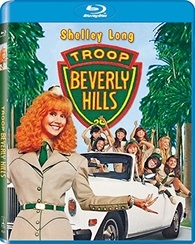