The 2017 action-thriller directed by fight choreographer Peter Malota is planned for Blu-ray in June.

In an early announcement to retailers, Sony is preparing 'Kill 'Em All' for Blu-ray on June 6.

Directed by famed fight choreographer Peter Malota, who worked with Van Damme on the action classics Double Impact and Universal Soldier, this fast-paced, pulse-pounding movie finds the international superstar caught up in a deadly plot of intrigue and revenge. The original Bloodsport star also faces off on screen for the first time ever against Bloodsport 2-4 star Daniel Bernhardt (John Wick) in a showdown action aficionados won't want to miss.

After a massive shootout, a mysterious stranger (Van Damme) arrives at a local hospital on the brink of death. Then, a foreign gang brazenly comes to the hospital to hunt him down. His nurse, the sole surviving witness to the follow-up shootout, must face an FBI interrogation that unlocks a plot of international intrigue and revenge. With enough twists and turns, KILL'EM ALL will keep you guessing until the final bullet is fired.

You can find the latest specs for 'Kill 'Em All' linked from our Blu-ray Release Schedule, where it is indexed under June 6. 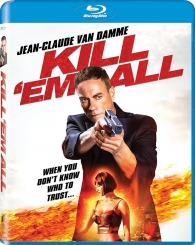