The romantic war drama starring Alicia Vikander and Kit Harington is headed for Blu-ray in October.

In an early announcement to retailers, Sony is working on 'Testament of Youth' for Blu-ray on October 20.

Testament of Youth is a powerful story of love, war and remembrance, based on the First World War memoir by Vera Brittain, which has become the classic testimony of that war from a woman's point of view. A searing journey from youthful hopes and dreams to the edge of despair and back again, it's a film about young love, the futility of war and how to make sense of the darkest times.

You can find the latest specs for 'Testament of Youth' linked from our Blu-ray Release Schedule, where it is indexed under October 20. 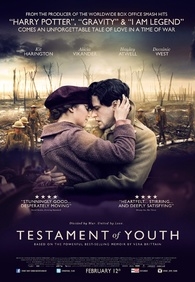